One of the things i love about Mora Clocks is how they vary so widely in build, stature and decorative effect – vive la difference!
Every Swedish Mora Clock has an entirely different series of decoration and mouldings depending entirely on the whims of the maker on the day or the request of their patron. There’s no better or worse to it really as its all down to personal taste. Some are so ornate that they are really OTT while others are very country simple – often less is more! So you’ll always find one that suits your personal taste and style.
One of the elements on Mora Clocks that is always different  is the shape of the decoration on the hood – some have none at all while others have very ornate crowns or decorative tops. There’s no logic to it – its just part of the creative process that makes the Mora Clock genre so interesting.
To show you what i mean I thought i’d put together a selection of the clock hoods from the 60 antique Mora Clocks for sale that we have in stock. If there’s one you like to contact us for a quote and remember we ship worldwide. 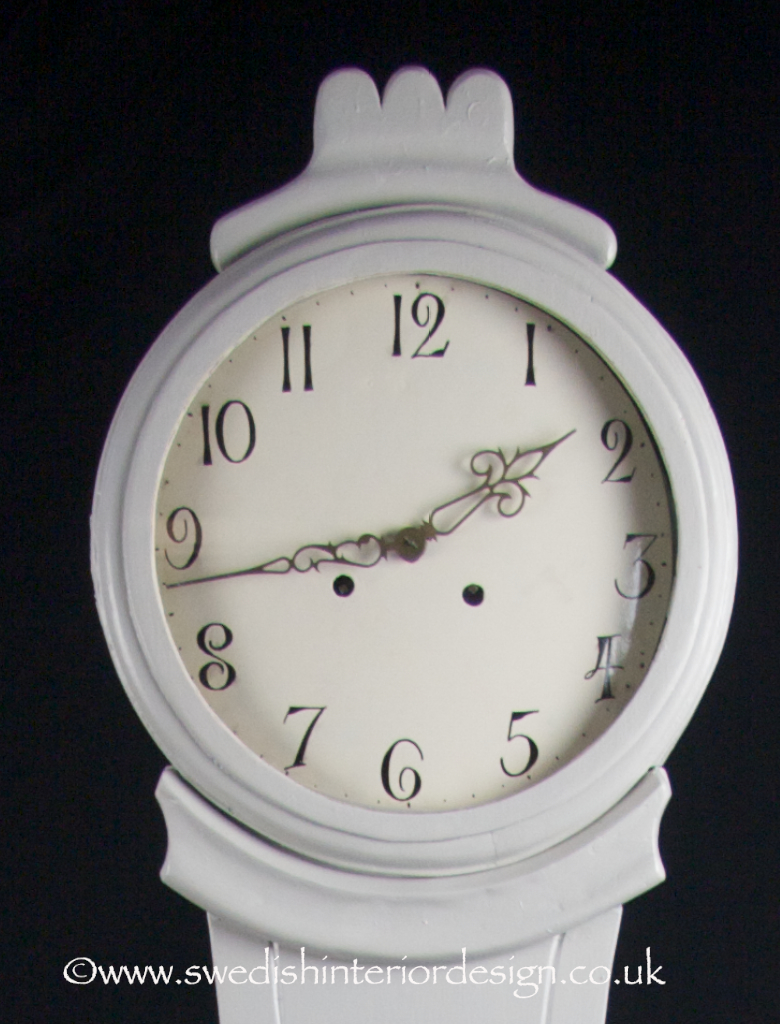 This grey Mora Clock  has a single country style crown – simple and elegant. Nothing too fancy but a nice decorative detail none the less that goes really well with the simple decoration on the body making this swedish clock a real country classic. Its perfect for a kitchen or living room where you want a dignified and restrained feel to your clock. Understated beauty is no bad thing. 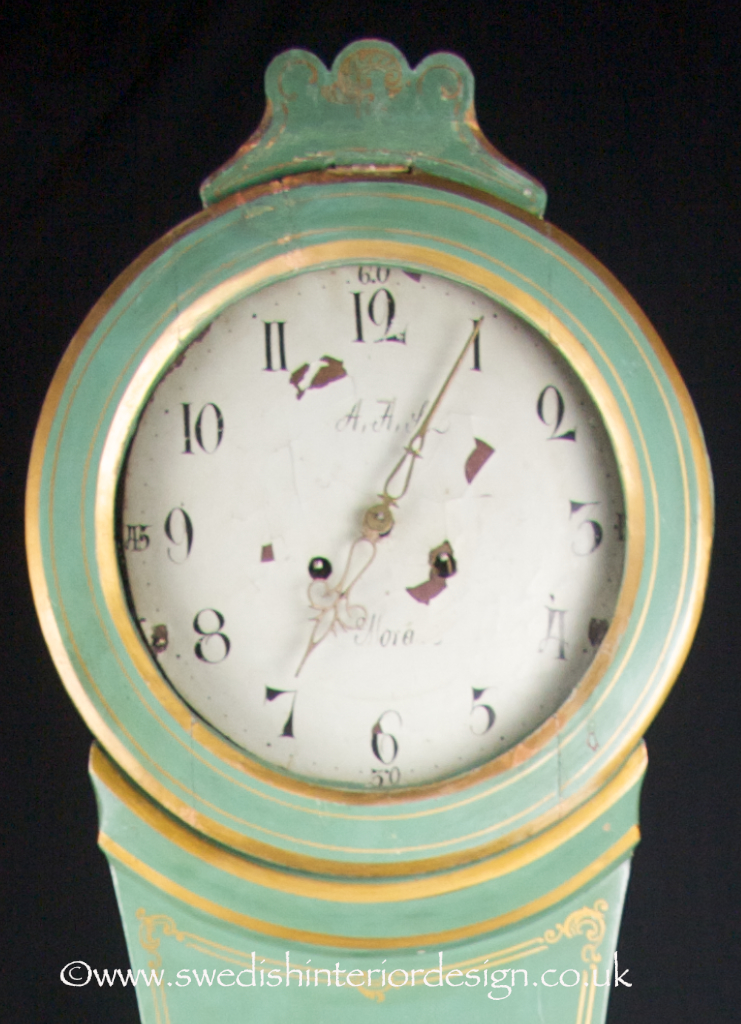 Next we have a slightly more ornate painted Mora Clock with handpainted gilt designs but still a simple country crown design – notice the very delicate filigree gold paint design on the crown that is echoed by the ornate gilt patterning on the body too. The body shape is classic of a swedish clock with the expanded belly but as its just under 2m tall it doesn’t overpower its surroundings like some mora clocks can. 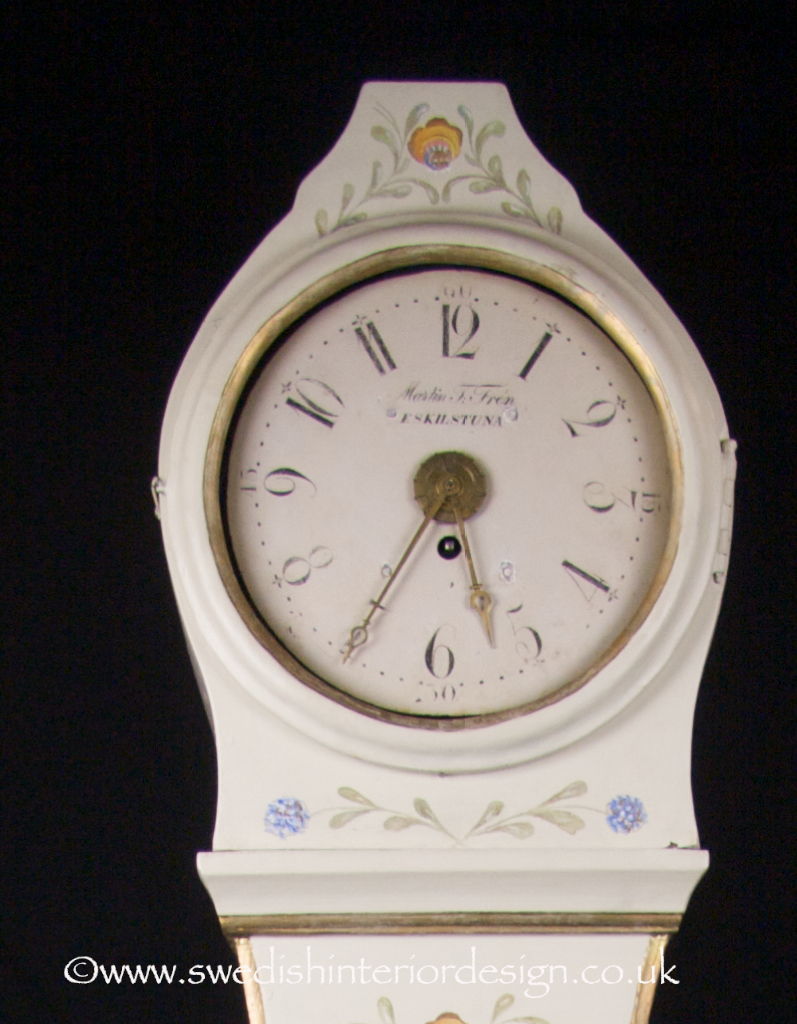 Thirdly here’s a more detailed Mora Clock design with a flat crown that hosts a beautifully finished handpainted flower garland – see how delicate the painting is on the crown and this follows on from the stunning floral motifs that adorn the body. The body itself is pretty simple in a country style with the classic mora clock belly shape. Its a great example of a folk art style mora clock – very often from the centre of Sweden around the dalarna region. Its really beautiful there with lakes and forests galore. 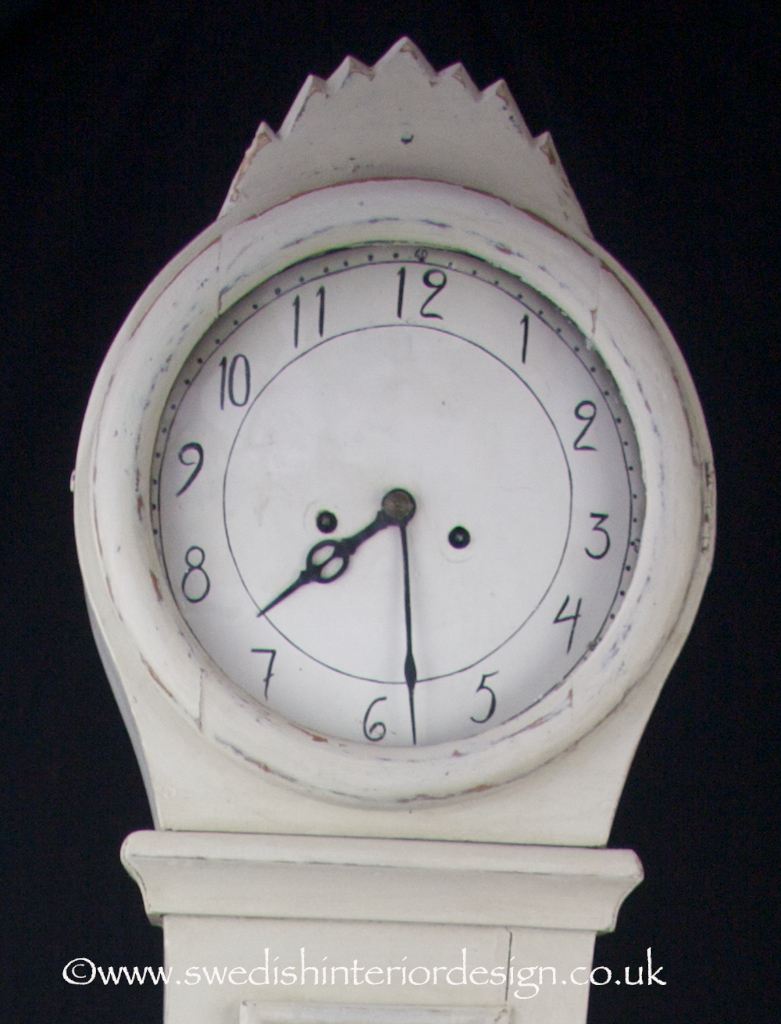 I call this the ‘Mountain’ crown Mora Clock – you can see why – and I havent seen one in this exact shape before. Most unusual. Its very simple in execution but works rather well I think. It makes the hood the leading feature on the swedish clock, wheras the body is more simple country in build with less detail and unusually a slimmer profile than most country Mora Clocks.The distressing on the points of the ‘mountains’ adds a nice feature to it making the detail more 3D when you look at it. 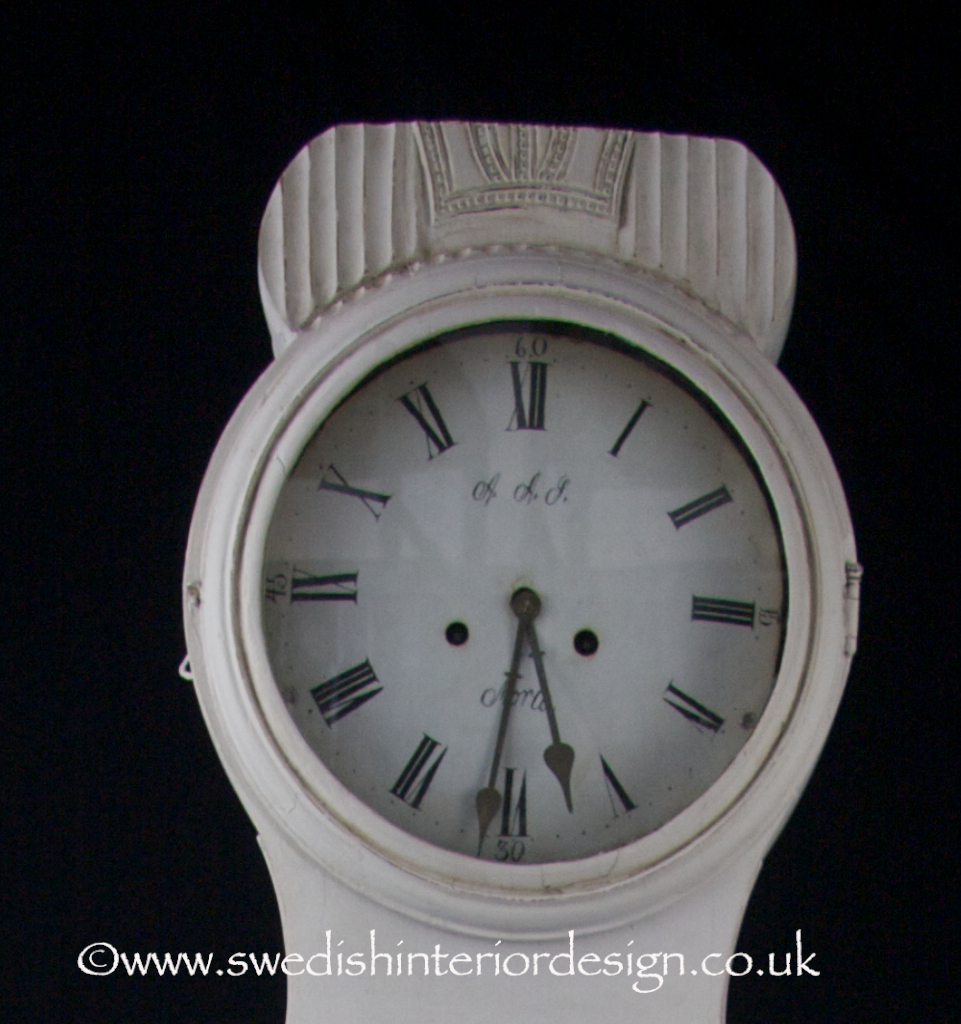 Finally this is an example of a more heavily decorated mora clock that would have been owned by a city family or country squire with more exaggerated and formal decoration including the classic Gustavian ribbing which is echoed on the Swedish clock body. Interestingly it has had the clock crown cut down at some point so it can stand in a smaller space and its something we see quite regularly on swedish clocks of this type for some reason.
So thats enough for today – tomorrow we’ll look at some mora clock hoods with very grandiose embellishments that would have stood in manor houses or rich town houses in sweden in the 1800s
Jo Lee is Director of Swedish Interior Design
antique mora painted clock,fryksdall clock,mora clock,mora clock face,mora clocks,mora clocks for sale,swedish clock,swedish grandfather clock,swedish mora clock